Hard Hat Hero Grant Jamison has been part of the trade for 21 years he is a journeyman lineman for local 196 based out of Batavia, IL.

Grant has not had an easy road, but he has fought for everything he has today, Grant just recently found out he beat cancer for the third time. Grant states, “when you hear the “C” word you think death, I wouldn’t be here today without the support and resilience of my wife and the bigger doctor above.”

Prior to being diagnosed with cancer Grant said his main priority was making as much money as he could and thought providing for his family would be enough. Cancer changed his outlook on life and with the support of his family and brotherhood, he was determined to not give up.

For the perseverance and resilience of Grant and his family, we are honored to have Grant be a true Hard Hat Hero. 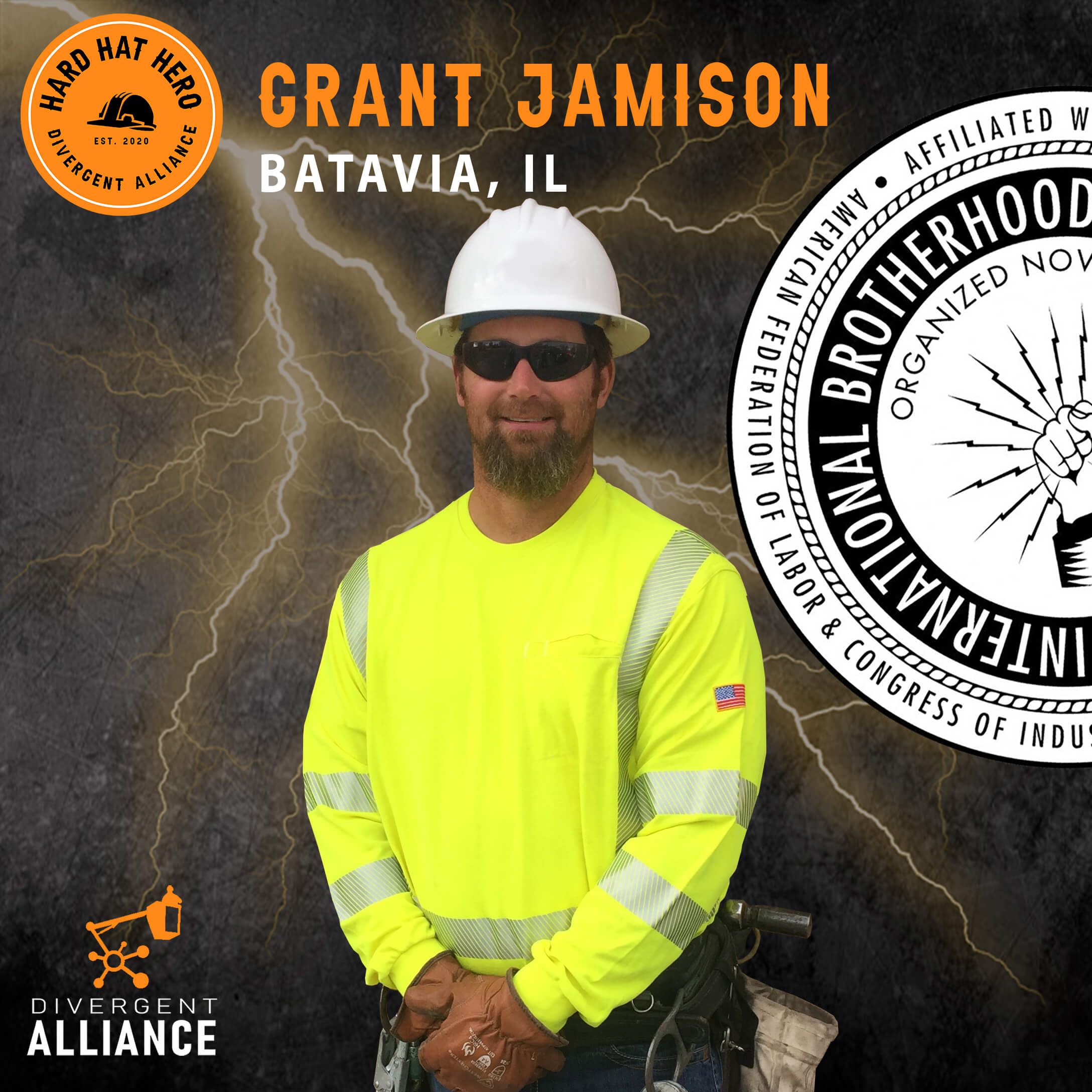 Hard Hat Hero Grant Jamison has been part of the trade for 21 years he is a journeyman lineman for local 196 based out of Batavia, IL. Grant did not know what he wanted to do with his life after graduating high school, he was working an unfulfilling job for UPS when his neighbor approached him about joining the brotherhood and becoming a lineman. As he progressed in his career, he found that he loves being outside, the fast-paced environment and an everchanging scenery with the ability to help people at the end of the day. If Grant could give a new lineman advice he states, “Take pride in your work, and take your time so you don’t get hurt.” Grant has not had an easy road, but he has fought for everything he has today, Grant is currently fighting cancer for the third time.

While Grant and his crew were responding to the devastation of the category 5 hurricane Michael that hit the panhandle in 2018, Grant started to not feel well. He would wake up in the middle of the night sweating, he explains, he knew something was wrong like his body was trying to get rid of something. Due to power outages from the storm, very few hospitals were accepting patients. After a couple of days, Grant was able to get into a hospital where they diagnosed him with a viral infection and sent him on his way. Another week went by and Grant was still experiencing night sweats, enough to where he needed to ring out his shirt just to dry it off. At this point, Grant decided to fly back home to Illinois where he could try and set up an appointment with local doctors that weren’t struggling with power outages from the hurricane with the hopes to get a firm diagnosis.

Once Grant arrived home, he visited his local doctors just to also be told that his levels are normal and that he has a viral infection. Grant’s wife studied his paperwork from the hospital and did some research returning to his doctor with more questions. After she pressed his doctors for more answers, they couldn’t justify the levels that Grant’s wife had found. The hospital decided to take Grant in for a scan and soon found that he had a 10cm tumor on one of his kidneys that was affecting his lymph nodes. When Grant heard the “C” word which everyone fears to hear. Grant says that once you hear “cancer” you automatically associate it with death and there is not much you can do mentally to keep yourself from thinking bad thoughts. Once again, Grant’s wife decided to act and started to book appointments with some of the top doctors in Wisconsin. After many consultations, they decided the cancerous kidney needed to be removed even though it meant a long road to recovery for Grant to regain his strength. Thankfully, Grant came out on top cancer-free.

He continued to see his doctors on a regular basis when a scan revealed that he had another cancerous tumor growing in his neck that attached itself to his spine. Grant and his wife felt defeated hearing the news that Grant had another challenge ahead. Relentless as always, Grant’s wife found doctors that specialize in cancer that is attached to the spine and not long after Grant was determined to beat cancer again. Grant was taken into surgery to remove the cancerous cells on his spine. Although, Grant’s family received another crushing blow. The cancer had spread to a location on his spine that made it too risky to remove without paralyzing Grant for the rest of his life. After the surgery, Grant went through a round of chemotherapy to try and kill off any other cancer cells that existed in his bloodstream, but likely wouldn’t take care of the cancer still left on his spine. Due to the treatment, Grant went from weighing a healthy 240 pounds to weighing 185 pounds. His strength began depleting, he had very little strength left to walk across the length of his house without getting tired. Grant’s wife started to do everything she possibly could to give Grant any advantage in beating this. Grant started an organic Mediterranean diet along with starting and ending each day with freshly juiced fruits and vegetables for the antioxidants and cancer-fighting properties.

A couple of months later, Grant went back to the doctor to get scanned and check the status of the cancer on his spine and to the doctor’s surprise, The cancer disappeared. Grant and his wife had no idea what to think except that a miracle had just occurred. Grant had beaten cancer for the second time. At this point, Grant had been prescribed a round of oral steroids to assist in him regaining his strength. A few months went by until Grant was due for another check-in. This time, Grant received more unfortunate news, but this time it came with some hope. The doctors found another tumor on Grants other kidney, but the tests also revealed that there was dead tissue around it, which meant that it was shrinking for some unknown reason. The Jamison’s continued their course of healthy foods, juice and maintained a very strong support system for Grant to continue this fight. For the past 7 months, Grant has been continuing to see his doctor and the tumor continues to shrink on its own. Hope is high and the Union Brotherhood is strong for the Jamison’s. Grants lineman colleagues wanted his family to feel secure during this difficult time. They have made many contributions so that the Jamison’s only worry is beating cancer for the third time. This time allowed Grant to focus on healing and being with his family.

Last month Grant went for another scan that revealed he is cancer-free! Grant has now beat cancer for the third time! Another miracle has unfolded before the Jamison’s eyes and the only place they can give credit to God for these continued miracles. Grant is proof that miracles DO happen!

For the perseverance and resilience of Grant and his family, we are honored to have Grant be a true Hard Hat Hero!