Hard Hat Hero Ryan Lucas has been in the utility industry for 20 years. For those of you who do not know, Ryan started the @PowerlinePodcast almost 2 years ago. His goal for the podcast is to provide mentorship, entertainment, and community for tradesmen and those from similar industries. Ryan spent 15 years on the tools as a lineman working in the field. Eventually, he moved his way up from lineman Apprentice to General Forman. Family circumstances had him take an office position, later becoming an executive but his heart remained in the field. He decided to take the plunge and start a podcast and later leave his stable job to take a chance on himself and a dream. Today, Ryan is still a lineman picking up jobs when needed, while expanding his personal brand as well. For Ryan’s passion for the industry and desire to help people we honor him as a Hard Hat Hero.

To further show our appreciation for our Hard Hat Heroes Safeguard has partnered with us to provide our heroes with a Compass personal voltage and current detector to keep our H.H.H. safe while working. 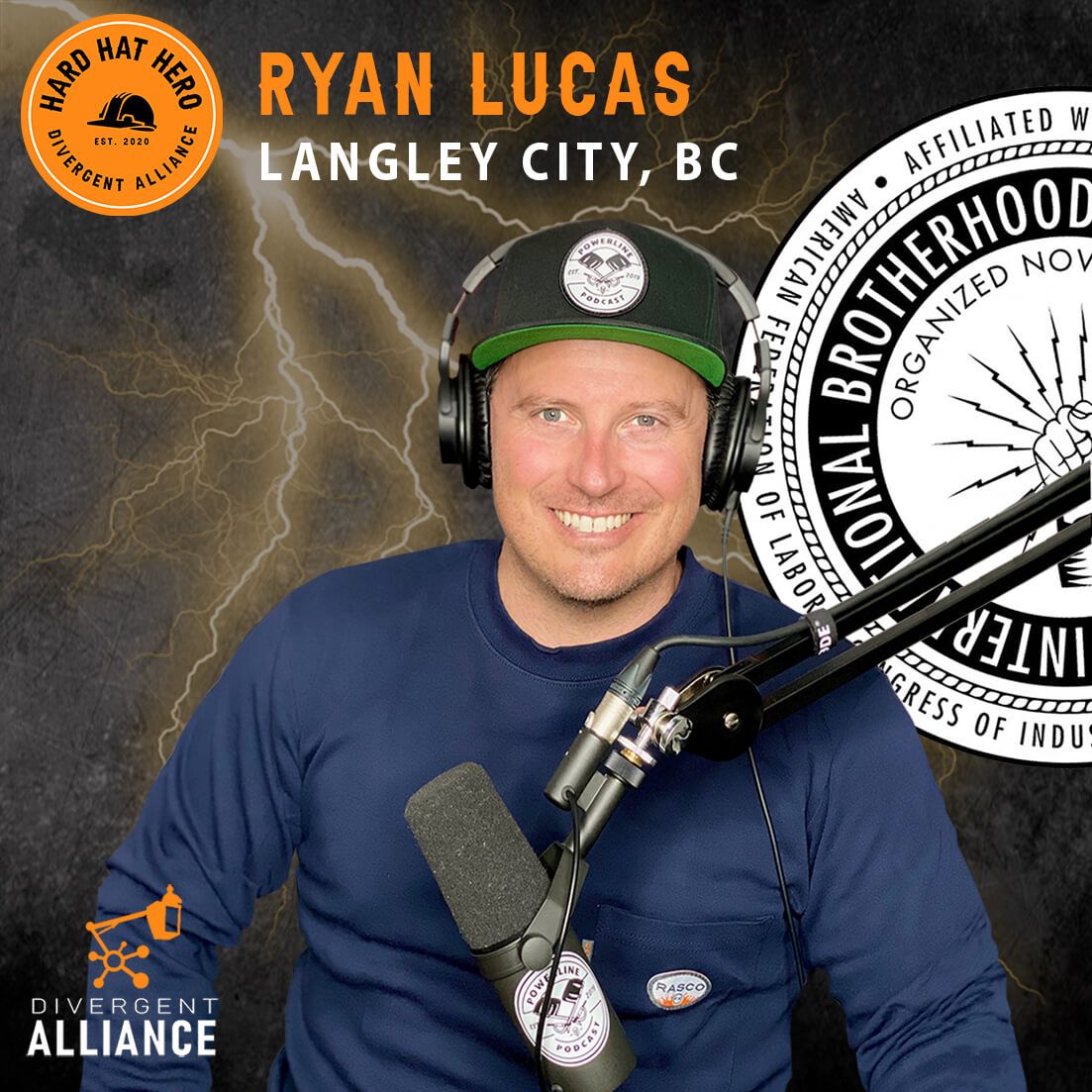 “the challenges each job presents, meeting new people, experiencing new places, and the thrill of having an office on top of a wood pole is what made me fall in love with the profession”

How It All Began

Ryan Lucas’s journey to becoming a lineman all started when he was a kid growing up in a small town in Canada. Ryan’s father started a small high voltage powerline company consisting of typically 4-line crews. His father would secure work and organize bids, while his mother maintained the company’s books and payroll as well as keeping the Lucas household running. To make the lives of the crews easier, Ryan’s family would provide room and board for the linemen as an incentive to stay working in the small town. Dinner time was always entertaining for Ryan as a kid. His father and fellow linemen would reminisce on stories about life on the road, linework, and the amazing places they have been. The dinner table stories always seemed to revolve around ice hockey or linework.

Naturally, growing up around linework Ryan decided to try out the trade for himself after high school. From the moment Ryan put on the lineman gear and climbed his first pole, he knew he was going to be a lineman. Ryan states, “The challenges each job presents, meeting new people, experiencing new places, and the thrill of having an office on top of a wood pole is what made me fall in love with the profession.” Ryan’s career has allowed him to travel all over North America. Although, he admits some places were better than others and no matter where he was, he was grateful for the experience. For instance, one job was barehand in the mountains of British Columbia, where temperatures were -25 to -35 degrees Fahrenheit for months at a time. On this job in BC, Ryan would hook on to the bottom of a helicopter, which in Canada their group was the first to pioneer the use of a long line on a helicopter for work practice. Ryan stated that this was a common practice for search and rescue at the time but had never been applied in a working environment on multiple repetitions. Once this work method was approved, the lineman would hook on to a long line on the bottom of a helicopter, fly up about 600 to 800 feet in the air, and be transported about 5 miles to be dropped off on top of a 500kv energized line where they would work the rest of the day.

Hardest Day on The Job

When asked about Ryan’s hardest day on the job he explains that he is grateful for every experience that he went through as a lineman. He states that he never really had a bad experience with any single job, but there are moments within jobs that just suck. For example, working jobs in below-freezing conditions in Northern Alberta, with the wind blowing hard and sitting on top of a tower, or in Texas when he had to wear a bee suit and get attacked by bees while trying to complete one of his jobs. Ryan States, “each job has its own challenges, similar to having challenging days in life, you have good days and have some bad days, but life is still good and once again I’m grateful for these experiences.”

Recommendations for a New Lineman

Ryan emphasizes the importance of making sure you want to become a lineman for the right reasons. Just because it pays well or there can be good money in the job, it doesn’t necessarily mean it is the right job for you. Before you become a lineman, you need to evaluate and see if it fits your lifestyle, your values, and the things you enjoy doing. Some of these things might be the love for being outside, like working with your hands, or adventure. A lot of young guys see the job on social media, and it might look attractive at first, but they need to make sure the reasons are there.

Ryan recommends that a new lineman finds out how they can set themself apart from another lineman that’s also trying to get ahead in the trade. He states, “If you can take any sort of electrical course, classes, training, or certifications before getting into an apprenticeship, the better off you will be in the long run. Any training or certifications that apply to the job would help as well. Any credentials you can offer to the person offering you a job is going to set you miles apart from anyone else on the street.”

Ryan preaches to his new guys that you almost need to have that work for free mentality to get to where you want to be. Not that you need to work for free, but the more you are willing to do to distinguish yourself and set yourself apart from the person sitting next to you, the further you will go.

How the Powerline Podcast Started?

When Ryan was growing up, he always overheard the stories of the linemen that were staying at his house. He would always hear these stories back then and never thought much of it. When he left high school and gave linework a shot, he started to accumulate stories of his own, realizing the connection between the types of stories he heard as a kid. After a while, Ryan thought it would be cool to tell line stories in a modern way. Podcasting is a way to create a record of the places we’ve been, people we’ve met, and people we’ve worked with along the way while providing value to listeners.

The Powerline Podcast started on March 27th, 2019. In less than 2 years Ryan has almost 9K followers on Instagram and 366 subscribers on YouTube. Ryan was inspired to create the podcast after he left his lineman position for a safer executive position for a large electrical contracting company but soon realized he wasn’t fulfilled by the monotonous office life. This was when he decided to create the podcast and create a business around it. Having the platform, Ryan says he continuously tries to offer value to his listeners because of his love for linework and the industry overall. He feels that offering value to his listeners is the best way for him to give back to the industry and all tradesmen alike. With the success of the podcast, Ryan has started a company called Electric Life, and soon he will start to offer more value and more programs to his listeners so he can help everyone stay on a continuous path of success.

Ryan today, is still a union lineman and keeps his name on the books with Local 258 out of British Columbia for when opportunities arise. When he gets called, there has been a couple of times where crews have recognized him, but he tries to stay humble and keep in mind that he is no different from anyone else.

What Is Your Motivation?

Ryan cherishes the time he spends with his kids and is motivated to be a great dad. Ryan hopes Covid has allowed everyone to take time and reflect on what is important in their life. He also hopes that everyone recognizes that it is important to take care of yourself and it is perfectly ok to do so. You have to show up for yourself if you want to be able to show up for anyone else. Ryan states, “Most people get caught up in going from job to job or project to project, and these people don’t take time for themselves. Gratitude is also extremely important and there is more opportunity to connect with loved ones over zoom than ever before.”

What Are You Most Proud Of?

Most importantly, Ryan is proud of his kids. He also is proud of the chance he took on himself. Ryan left his job in the middle of a pandemic to pursue his dream. A lot of people said he was crazy for stepping away from something solid, but he followed his passion and hasn’t looked back since. You have to be proud of yourself for taking a chance to do something on your own.

For Ryan’s passion for the industry and desire to help people we honor him as a Hard Hat Hero.