For performing tasks well above and beyond the line of duty, Divergent Alliance is proud to recognize Brandon McCaskill as a Hard Hat Hero. 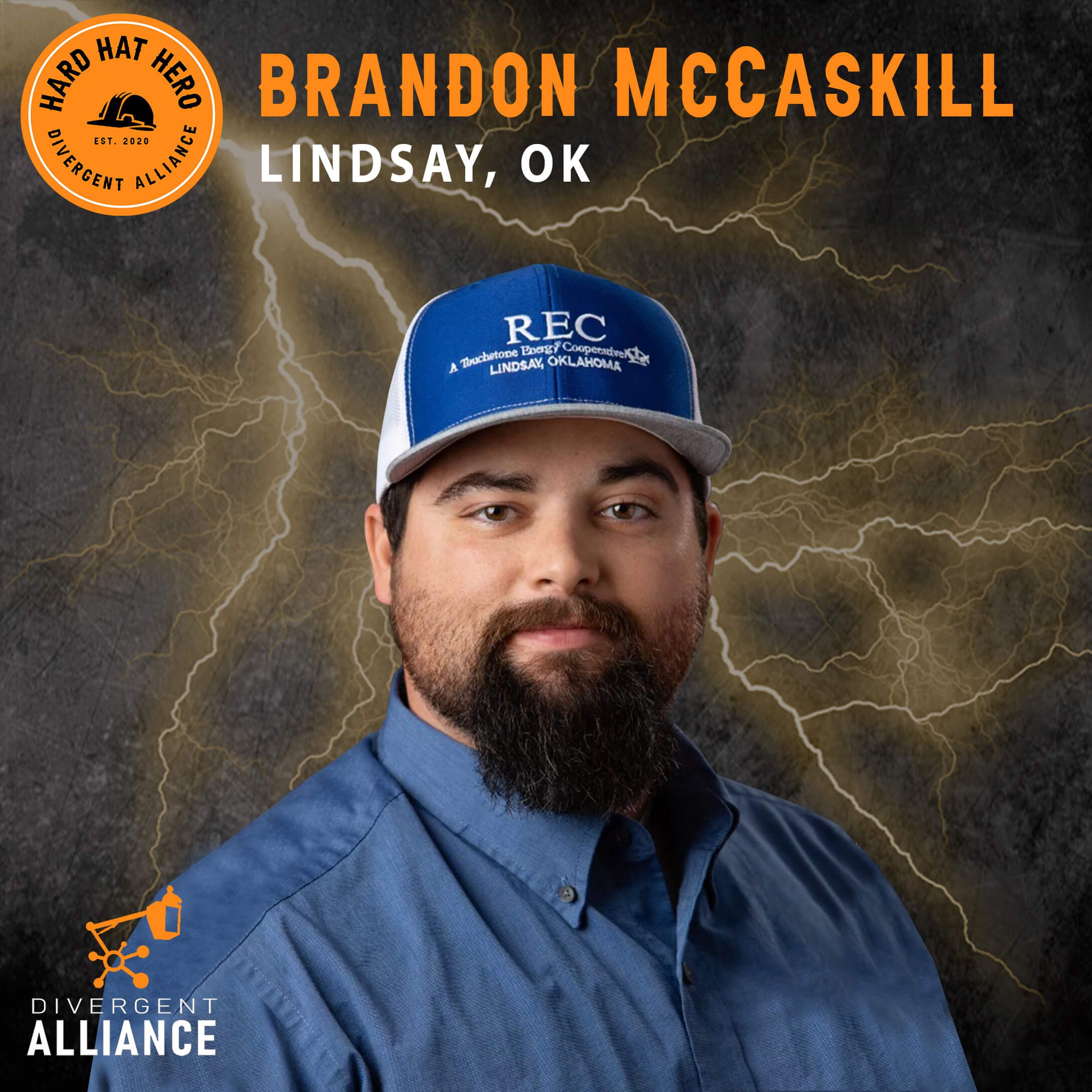 Brandon McCaskill is a lineman out of Lindsay, Oklahoma who works for the Rural Electric Cooperative in that region. A storm rolled through the territory on the night of April 27th, resulting in a never-ending flow of service calls with Brandon driving all over restoring one outage at a time. Traveling down some backroads on the way to restore one last power outage before his shift ended, Brandon slammed on his breaks when he noticed the road in front of him had been washed away by the heavy rains and floods. As he rolled down his window to get a better view so he could put his truck in reverse, he heard very loud whistling coming from the washed-out road in front of the truck.

Why did you become a lineman?

The inspiration for Brandon to become a lineman came from an older friend who had already been working for Oklahoma Gas and Electric for a long time. One day they were talking about reliable careers and the topic of line school came up. Brandon had a lot of questions, but the friend decided it was best just to let Brandon try to climb before answering any more. One day, this friend took Brandon out, suited him up with the proper gear, and taught him how to climb a pole for the first time. Brandon caught on immediately, fell in love, and wanted to go to line school right away.

Brandon ended up following this path to OSUIT (Oklahoma State University), where he graduated as a High Voltage Line Technician in 2013 and went right to work maintaining the powerlines for the oil companies down in Texas. After some time down in Midland, Texas, Brandon pursued a position back home and got into the Rural Electric Cooperative where he continues to work today.

Favorite thing about being a lineman

Being a lineman is something not a lot of people can do, and something is exciting about the danger that the job entails. If you think about when your parents told you not to do something, it made you want to do it more. This was Brandon’s approach to linework when everyone said he should not do it, or that it was too dangerous to do. The responses only made him want to pursue linework even more.

On the night of April 27th, large storms were expected to bring hail, damaging winds, and about 5 inches of rain within about 20 hours to Oklahoma. With this type of weather, Brandon knew he’d be working all night responding to service calls. The first call came in about 9 pm and they just started to roll in all over the system shortly after. At about 1 am, Brandon was up to about 450 outages on his screen, so he called in for some extra dispatch support to help sort through some of these outages and see what still needed to be responded to. Toward the end of Brandon’s shift, he started heading towards a town called Pernell, Oklahoma, where he explained is a small town. Just about every road was flooded around this town, so Brandon drove all around looking for an alternate route that was not underwater.

Brandon eventually got onto a County Rd that was in pretty good shape until he immediately had to slam on his breaks. The road and bridge crossing a creek had been washed out in front of him. Brandon decided to call the county and let them know about the road, but he had no cell service being in this remote area. Brandon placed a radio call into the dispatch office and had them get in contact with the proper authorities, and in the meantime, Brandon was going to set out some cones so the hazard was more visible to other drivers that might travel this road.

As Brandon rolled down his window to back up his truck, he heard a loud whistling noise but wasn’t exactly sure what it was. For some reason, he thought it was some sort of bird or animal in the distance in the woods. Brandon then decided to open his door and stand on the step of his truck to take a look around. He then heard the whistling turn into yelling and screaming for help. As soon as Brandon realized it was a person, his stomach dropped, and he climbed down to grab a flashlight from one of the bins on his truck. With the flashlight in hand, Brandon ran over to the edge and started looking out into the creek for the source of the whistling and screaming. His light then came across a car that was in the creek with water rushing violently into it, but he could not see the lady that was yelling. The car looked like the windows had been kicked out, so he looked around the area until he found her about 15 feet from the car clinging to a rock in the middle of the creek with water hitting her in the chest and face.

This was not a situation that Brandon was trained for, so the best thing he could do was keep his nerves in check and do what any other lineman emergency called for. He ran right back to the truck and got on the radio with dispatch to call in a mayday about the lady stuck in the creek. He knew with no cell service; this was the only way he was going to get emergency services to his location. Russell over at the dispatch center took his radio call for help and was able to GPS the location of Brandon’s truck to get emergency services over there. Once Brandon had the distress call into the dispatch center, he ran back over to the edge to yell to the lady that help was on the way. The lady yelled back sounding terrified asking Brandon not to leave her. Brandon assured her that he was not going anywhere, and told her that he was going to grab a rope from his truck. Brandon ran quickly to another bin on his truck where he stored his handline. He removed the attachments so they would not cause any injury if he threw the handline into the water. Brandon ran back to the edge of the creek and shined his light back on the lady to yell to her his plan.

Brandon threw the end of his handline past the lady, shined the light on it so it could be seen in the creek, and waited for the current to push the line towards her. Brandon stated that he thought it would take 10 or 12 tries for this to work, but it happened to work out on the first try. Brandon yelled down for the lady to tie the rope around herself so he could pull her out. She couldn’t hear that well because of the water rushing at her and apparently couldn’t move her legs. Brandon wasn’t sure if it was because of an injury or because she had been in the water so long.

The lady was finally able to secure the rope to herself and let go of the rock she was hanging on to. The water was so strong that she disappeared momentarily, and it started to pull her away.  Brandon pulled as hard as he could and was able to get her to the edge of the bank where her arms were able to touch some solid ground where Brandon was standing and at this point, the rope had come undone. Brandon reached down and told the lady to hang onto his arm while he secures the rope around her again.

With the rope secure again, and the lady hanging onto Brandon’s arm he told her, “You have to help me so I can get you out of this hole.” The lady was able to muster up just enough strength in one of her legs to help give Brandon that extra nudge that he needed to pull her up over the edge onto the solid ground.  Just like in the movies, Brandon fell to the ground completely exhausted from the rescue effort. As soon as Brandon caught his breath, he checked the lady for injuries and reassured her that everything was going to be ok now. All the lady could do was thank Brandon and thank God for sending him her way. Even though the lady was already soaked from the creek, Brandon got up and grabbed a rain jacket from one of the bins in his truck, and put it on her to provide a little warmth.

After they both calmed down, the lady mentioned the approximate time that her car went over the edge and that she had to kick out her windows just to exit the car. From Brandon’s estimate, he says that she had to be hanging on down there for a good 30 minutes before he showed up. The fire and police departments had finally shown up and Brandon helped walk this lady to the firetruck and put the heat on for her. Emergency services took over the scene and Brandon’s rescue effort was finally over.

After Brandon’s rescue effort, his overnight shift was ending so he proceeded to head back to the reporting yard where he would then head home. As soon as he got home, he went right to sleep and when he woke up, he had more missed calls and text messages than he had ever seen. The story of his rescue was already circulating the local news and social media, so friends, family, and other media outlets were trying to get in touch with him to talk about what had just happened.

Brandon was able to keep his cool in a situation that he had never been trained for, or never thought he would be in. For performing tasks well above and beyond the line of duty, Divergent Alliance is proud to recognize Brandon McCaskill as a Hard Hat Hero.

Divergent Alliance is passionate about selling lineman tools and lineman gear. We can stock bucket trucks with all your tools and test and repair grounding equipment. Fill out a contact form or give us a call at 847-531-0559