Rob Wiggs is a former Journeyman and now one of the partners of Dynamic Utility Solutions located in Carol Stream, IL. As many linemen know the struggle of being a dad and a lineman is a difficult balancing act. Rob talks about life and how it led him to where he is now. Rob explains at the beginning of his career he was never one for safety rules until he survived an explosion in a manhole, this traumatic event led him to be one of the biggest safety advocates today. Keep scrolling for his full story.


For Rob’s desire to change the industry for the better and his passion for life, we honor him as a Hard Hat Hero. 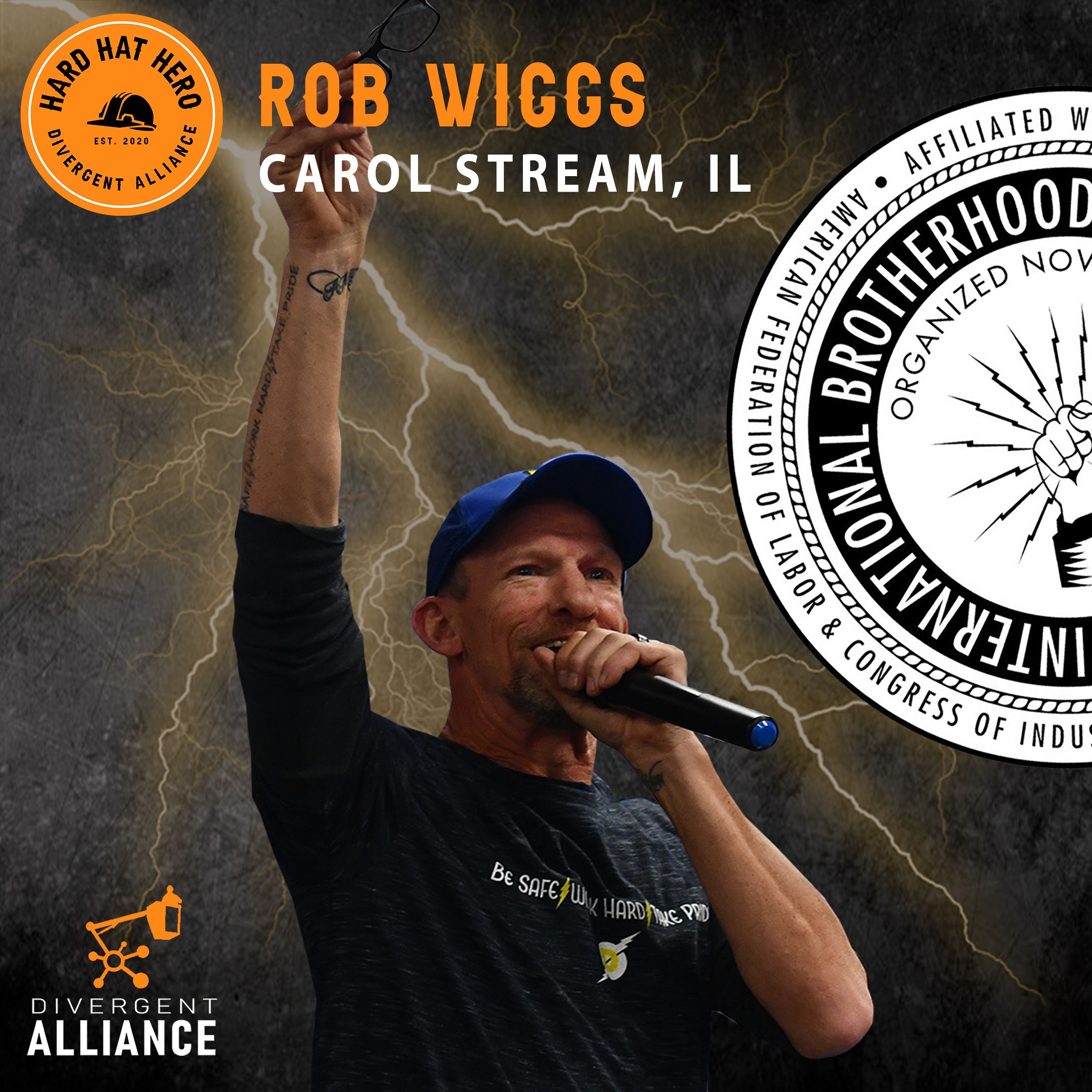 Rob Wiggs is a former Journeyman and now one of the partners of Dynamic Utility Solutions located in Carol Stream, IL. Rob and his wife got married and had their first child at 18.  Now married with a new born and needing to provide for his family Rob got into carpentry and aluminum work and soon fell in love with working with his hands but knew the work was seasonal. A family friend who worked for ComEd suggested that he apply for a job there.

Rob was hired as a meter reader at 20 years old but did not know anything about electricity or electrical systems. He says that meter reading was one of the worst jobs he’s ever had because he always seemed to be the meter reader that hopped a fence to find an angry dog waiting on the other side. Meter reading led Rob to climbing school at ComEd, which then lead to becoming a Journeyman specializing in underground work in Maywood IL. Rob fell in love with the career, specifically the art of splicing lead cable, and the overtime that was always available. Robs new career allowed the Wiggs family to buy a new house and expand their family with another son and daughter.

Rob says there were a lot of tradeoffs with making money as a Journeyman. He was working 60-70 hours a week but was missing his kid’s baseball games, parent-teacher meetings, school events, and more. Rob’s parents would tell him, “you are going to wake up one day and your kids will be grown” but Rob explained people would say that a lot, but he did not think anything of it at the time. Rob realized the tradeoffs of working a lot and explained the biggest mistake throughout his career is that he didn’t do a better job of balancing work and his family. He states, “never take time with your family for granted because your kids will grow up faster than you think.”

There was a specific day that changed Rob and his family’s life. Back then, Rob said he did not always put safety first, but that his main focus was getting the job done. He would attend safety meanings and be one of the guys in the back of the room, not fully paying attention. On day of his accident, Rob was working in Downtown Oak Park, Illinois with a different crew than he usually worked with, and he remembers going through the whole day just feeling off. Rob stated that the only thing he did right that day was to wear his FR clothes.

Part of the job required isolating a network protector in one of the manholes. Rob went to cut the cable after the network protector was isolated, and inadvertently he cut an energized cable with a grounded tool. A large flash occurred and knocked Rob off his feet and the only thing going through his mind at that moment was the thought that his crew leader and partner were killed immediately. Rob’s crew leader and partner survived, and Rob’s 1st layer of clothing was burnt off his body. There were some issues trying to get the second manhole cover open to get Rob out, and at this point, Rob started making peace with the fact that he was going to die. He was dragged out of the manhole, where ambulances and fire crews were waiting for him.

After this incident, Rob realized the trauma he put his family and his crews loved ones through and knew he needed to make a change. Rob thought ComEd was going to fire him for breaking safety procedures, but they asked him instead to take what was left of his FR clothing from the accident and travel around to all the local offices to talk to field employees about the importance of following safety protocol.

After about 6 months of sharing his story with other field employees, Rob met Greg Kiraly. Greg soon became his mentor and asked Rob to join the management team at ComEd. As his mentor, Greg pushed Rob to go to college and continue his education. Rob took Greg up on the challenge and completed his B.A. from DePaul University. After graduating with his degree Rob was promoted to Key Manager and oversaw The Underground and Network High Rise departments in the city of Chicago. Within his new role, Rob fell into the habit of choosing his career over his family. A staple moment he remembers was being at the dinner table with his family, the kids were laughing, and Rob’s phone rang he answered the call and he shooshed his kids to be quiet. Rob’s wife took the phone away from him and said, “This is not acceptable” He knew right away that something must change again.

Rob ended up leaving his job at ComEd, and he continues to thank everyone he worked with to this day. He says he owes a lot to the people he’s worked with and even more to his mentors. Rob accepted a job with a small family-owned contractor. Over the span of 10 years, the team was able to grow the company to 1100 employees. Rob ended up taking a severance package from the family-owned contractor and admitted that it was not a great exit after 10 years.

While flipping houses and pursuing some other contracting opportunities, Rob realized that he wanted to build an electrical contracting company, from a “hands” perspective. He approached Joe Suriano and Joann Bauer with this idea. Both Joe and Joann had vast experience in the electrical world. Both bringing different perspectives of the industry. The three soon put together a business plan.

Dynamic Utility Solutions started in Rob’s Garage in November of 2016 with 2 trucks and 6 employees. Dynamic currently has over 100 employees and a fleet to match.

Those 6 words are at the core of what drives. And more than words, they are behaviors he tries to practice and instill every day.

“Work hard” to Rob is setting the expectations that when you come to work, you work. He states at Dynamic we outwork the competition. Being a small company, we don’t have more money, we don’t have more resources but, what we do have is more heart and we will out work them. “Beat them in the dirt”

“Take Pride” Rob made a choice to set dynamic up as a union contractor. With that choice there comes a huge responsibility of being a “union contractor”. We take pride in our craft. Taking pride is part of the reason the company is named “Dynamic”. Dynamic’s definition as an adjective is: constant change, activity, or progress. Positive in attitude and full of energy and new ideas.

Rob believes that the mentality of taking care of your crews creates a great culture at Dynamic Utility Solutions and sets the company up for success in the long run.

Favorite part of the trade

People!  People and the relationships he’s made along the way is like no other business he’s ever seen or heard about. Rob states he has been lucky in his career to not just build long-lasting relationships but to consider them a lot of them, family.

Rob explains the best thing a young lineman can do is never stop learning. He highly recommends going back to school and getting your degree. Education is something that can never be taken away from you.

Being part of the brotherhood does not mean just show up and pay your dues. You need to take pride in being a union member. Go to the meetings, volunteer, don’t take it for granted, and remember to turn around and help the next one in line.

General inquiries can be sent to the following email:

For Rob’s desire to change the industry for the better and his passion for life, we honor him as a hard hat hero.

Divergent Alliance is your one-stop-shop for lineman tools and lineman gear! We are proud of our wide range of distributors Salisbury, Buckingham Buck, Madi Tools, and more. Our wide range of products includes FR clothing, grounds and jumpers, fall protection, insulated tools and so much more. Give us a call or request a quote!